Thoughts on Inspiration (and Kool Aid)

When you root for a favorite sports team, what exactly are you rooting for?
I’ve been doing a lot of pondering on the topic lately. We would laugh at somebody who likes a team because of its colors, or the team logo. But don’t most of us do that?
The question I’d like you to ponder is; what is it about “your team” that you actually love? Do you root for certain players, or coaches, or owners, or do you really just root for the colors? 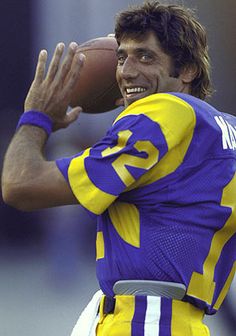 I was cursed to become a fan of the New York Jets while a first-grader back in 1971. What drew me in? Yep, Joe Namath. I loved Broadway Joe and wanted to be just like him. I watched every Jets’ game, knew everything about every player on the roster, and drew #12 on all my tee shirts with magic marker. (No, I didn’t put on panty hose).
In 1977, my world came to a screeching halt when – just two months before my 13th birthday – Joe Namath was traded to the LA Rams. Say it ain’t so, Joe!
NFL varsity jackets were all the rage and I was in line to get my first one for that special “teen” birthday. My parents spent hours trying to talk me out of my new wish . . . a Rams’ jacket! If Joe was a Ram, then so was Tommy.
As it turned out, Namath only played four games for the Rams before his knees did him in one last time. And back to the Jets I went crawling, stupid Rams jacket and all.
In baseball I was a Cincinnati Reds fan and my favorite player was #15, George Foster. I wore #15 in every team sport I’ve ever played – even until this day. And when George Foster became a New York Met . . . so did I.
So here I sit as a Jets, Mets, and Knicks fan and at age 50, I can’t stand the ownership, and I can count their combined championships on one hand. Ouch.
Hold up, Tommy.
Isn’t this a “network marketing” blog?
Yep.
So how did you come to join your current network marketing company?
Was it the products? Was it the ownership? How about the logo? Or maybe it was the players?
Maybe you looked into somebody’s eyes and believed in the dream your sponsor was sharing. Maybe you said, “That (person) knows where he/she is going, and I want to be around that fire.”
I’ve always dreamt of being in just one network marketing company for my whole life but that dream betrayed me when my first company went out of business. Then I was faced with the reality that you don’t win a championship with just any team. Like in sports, timing and circumstances mean everything.
Do you actually believe in your owner who keeps promising “we’ll turn this around” year after year after year after year? It’s called blind loyalty and can lead to a lot of heartbreak.
Trust me on that one. I’ve been saying “wait until next year” in sports and in network marketing for a long time.
Is rooting for a losing sports team the same thing as staying with a network marketing company where you’re not winning?   While clearly similar; sports are still sports. Your business is far more important. I’ve loved my sports teams all my life and always thought they would win. Had I bet on the games, I’d be broke.
Ironically, had I stayed with my instincts in 1977 (and the Rams) I would have seen my team play in three Super Bowls. Instead, I’ve seen zero.
So beit. I’ll stick with my sports teams forever. I’m loyal (though I’m not entirely sure why).
In business, though, I’m going to find me a winner.
Wait til next year!
No, seriously.

One thought on “Thoughts on Inspiration (and Kool Aid)”